Why did the fish go on land? Because it is evolution’s nature (to fill ecological niches. That’s why lobe-finned fish went on land around 370 million years ago and became the first amphibians.

The obvious reasons were push from predators and food competition in the water, and the pull from abundant food on land: Insects and plants.

It sounds simple, but it took nature many steps to get there.

First, photosynthesis had to fill the atmosphere with oxygen so insects and animals could breathe. The oxygen content had jumped up and down through the billions of years, at the mercy of photosynthesis, plate tectonics and continent configuration. Abundant life and photosynthesis increases the oxygen content, while volcanism can reduce it, because sulfur from volcanoes consume oxygen when it reacts to SO2. It was not until the end of the Precambrian that it kept stable above around 15%.

Oxygen was also necessary to develop the ozone layer, which protects us against ultraviolet radiation. Ozone is an oxygen molecule with three atoms, O3, so before the oxygen was stable in place, going on land would have meant that all animals risked skin cancer.
Second, plants had to go on land, so insects had something to fed on. The first land plants from the Sirlurian, were Cooksonia; tiny, weak stems a few cm long, without roots or leaves and a spore capsule on top. 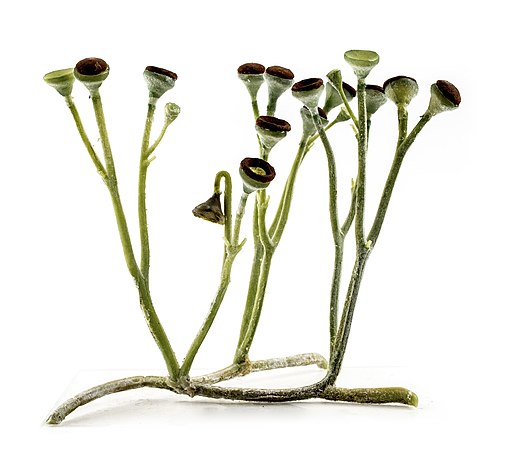 The pioner: Tiny Cooksonia was the great-great-grandfather of pineapple, chili and poison ivy. (MUSE [CC BY-SA 3.0 (https://creativecommons.org/licenses/by-sa/3.0)], via Wikimedia Commons>)

Through the Silurian and Devonian, these tiny things developed roots, leaves, breathing stems that could keep moisture inside and liberate plants from floating water, and then lignine in the stems; the stiff compound that becomes cellulose, which enables plants to grow big and become trees. Plant evolution is itself a big topic, but for now, we recognize that by the Devonian the Earth had become green.

Third, when plants were ready, insects flew onto land. Insects are basically one of the many branches of the evolutionary tree that started with exoskeletons, crustaceans that climbed onto land and developed wings. The oldest insect fossils are around 400 million years old, from the Rhynie chert in Scotland.

To go on land, insects, like plants, had to adapt to the new environment, but the adaptions were easier to do: They already had a stiff shell, which could be modified to fit air and breathe. Insects “breathe” directly through small holes in the shell and through tubes into their body, called trachea, so they did not have to develop lungs, but they still needed to avoid drying out.

Only when the insects were established on land, was it time for fish to develop legs and follow. Amphibians developed from lobe-finned fish, with meaty fins, and we can follow the transformation of the fish in fossils: Fins became sturdier and developed into legs. The spine became more solid to support the body outside water, and the head joint enabled the head to move independent of the body. They became tetrapods, “four legged animals”, which all amphibians, reptiles and mammals belong to.

Inside, the swim bladder changed from a buoyancy device to a proto lung, and to amphibian lungs. Because soft tissue does not fossilize easy, we do not have fossils of the transition, but we have something similar living today: The lung fishes, which are able to stay buried in the ground and breathe during the dry season in the tropics.

But, did fish really jump out of the water, snap an insect and crawl back for at ten or twenty million years, while legs and lungs developed? Sounds a bit far-fetched? It is actually more probable that the legs came first, helped by tides and shallow water in rivers. The fins changed shape, so the fish could use them to “walk” on the water bottom at low tide, and hold on to the bottom in river currents.

Then, they started to snap air during low tide or in shallow rivers, before they finally went on land, and embarked on the long journey towards walking on two legs.

Walking fish exists today, too. Frogfish are a group of small fish, related to the deep-dwelling anglerfish, which live on the bottom of tropical seas.

You talkin’ to me? Frogfish use their special front fins as legs, walking around on the sea bottom. This red badass is from Sulawesi, Indonesia. (Image by Christian Gloor from Sottens, Switzerland [CC BY 2.0 (https://creativecommons.org/licenses/by/2.0)], via Wikimedia Commons)

Frogfish are from two to 40 cm long, sturdy, blocky and without scales. Some camouflage to blend in with the sea bottom, others have bright colors to look like corals – even back fins shaped like corals – and some have hairs to mimic sea urchins.

Rather than swim, frogfish prefer to walk on the bottom. Their front fins are sturdy and twisted, to almost resemble a foot, at the frogfish use them like that.

And we must not forget our friends, the aquarium cuties, the mudskippers, which live in the tidal zone. Mudskippers can breathe through their skin if it is wet. They spend much of their time on land, stumble around on their front fins, and even fight about territory.

Frogfish and mudskippers are not related to the lobe-fins in any way, but they show behavior that may – may! – one day in some million years lead to fish going on land once more.

Tiktaalik comes from the early Devonian (ca 375 million years ago) of arctic Canada, a climate as far as one can get from the lush tropical shores, in which thos rocks were deposited. Tiktaalik was basically a lobe-finned fish, but with sturdy skeleton and strengthened, stubby fins, which could crawl short stretches.

Ichtyostega and Acanthostega some from slightly younger rock in East Greenland, around 365 million years old. Ichtyostega had its fins transformed almost into fully developed legs, but the head and tail were still tiiktaalik-fish-like. Acanthostega is an almost finished amphibian, but with a big tail, suitable for giving a good push under water.

Ichtyostega, Model of Ichthyostega at the Staatlichen Museum für Naturkunde Stuttgart, Germany. Note that the fins have became legs, but the body and head is still basically fish-like. (Image by Dr. Günter Bechly [CC BY-SA 3.0 (https://creativecommons.org/licenses/by-sa/3.0)], from Wikimedia Commons).

New finds threaten to turn the tetrapod clock back. A quarry in Zachelmie, in the Holy Cross mountains in Poland have rocks from a395 million years old beach. The beach is thusaround 20 million years older than Tiktaalik,and it has tracks from a crawling animal. The quarry has not yielded any bone fossils, but the track patterns clearly come from animals that walked or crawled on four-legs – or four-proto-legs. Judged from their footprints, some of the animal may have been 2,5 meters long – giants for the time.

The Polish tracks create quite a conundrum. How can a (probably) well developed tetrapod be older than Tiktaalik? There are two possible answers: One is that tetrapods actually evolved earlier than we have previously thought, and that Titktaalik, Ichtyostega & Co are leftovers from that evolution – in kind of the same way that both lemurs, monkeys and apes still are around, even if some of them evolved into humans. Another possibility is that the tracks in Poland are from a first attempt at getting on land – but which failed in the last stage, and that Tiktaalik is on the lineage that finally succeeded – and started the 375 million year long on-land part of the quest to become us.

In the next episode, we will go back even longer, almost to the beginning of the time of the Earth. To the greatest crash ever.

This post is partly based on the books Gaining Ground: The Origin and Evolution of Tetrapods by Jennifer A. Clack, and The Emerald Planet: How plants changed Earth’s history by David Beerling.