Iceland. The land of Ice and Fire. Today, more fire than usual, and we geo nerds hope for a long-lasting repetition of the Krafla fires, which played their theatre in nine eruptions between 1975 and 1984. But please no repeat of the Laki fires that through eight months from June 1783 spit out so much ash, sulphur and fluorine that they killed half of Iceland’s livestock and one quarter of its population. Volcanoes are best when eruptions are of tourist friendly size.

Icelanders have a love-hate relationship with their volcanoes. On one hand, they create lots of trouble, when they bury towns or drown crop fields in ash and create jökullaups that send large parts of their main road into the sea.

On the other hand, volcanoes create spectacular eruptions, geysers and hot springs that tourists pay to look at or bath in. Mix in glaciers and get spectacular landscapes, more tourists and more money. 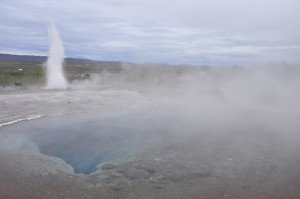 Hot springs in Haukadalur – a.k.a. Geysir. The geyser Strokkur blows every five to ten minutes. Nice to look at, slightly impractical for energy production. 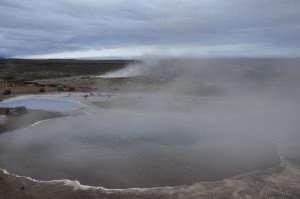 Stori Geysir, in the background, is the name-mother of all geysers. Since the 1930s, she has been dormant, but awakens occasionally in the wake of earthquakes. 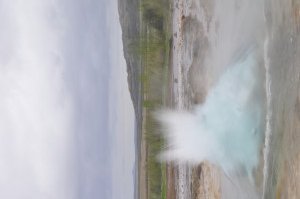 Ready…Strokkur erupts every five to ten minutes, with a big water bubble…

…and then a rain of hot water onto the tourists.

Iceland today has one of the world’s highest energy consumptions per capita. Lots of hydroelectric power, lots of geothermal power and hot water springs provides abundant, environmentally friendly energy. With few people and no ways to export, there is really no point saving.

But, through most of its history, Iceland has been on the borderline of survival, and also an ecological catastrophe. The Vikings cut down most of the trees, and agriculture destroyed much of the light, fine grained volcanic soil. Not a good idea, just before the mild Middle Age was replaced by the colder climate of the Little Ice Age. Peat, and, later, imported coal was used for house heating. Reykjavik – “Smoky Bay” – really deserved its name, often clouded in smog from the coal.

Of course, hot spring baths are as old as the first settlements on Iceland. The Vikings constructed bath tubs, “ heitur pottur” – hot pots – in the springs that are all over the place. Snorralaug, belonging to saga writer historian Snorri Sturluson is the most famous, still going hot after seven hundred years (and some refurbishment). Clothes have been washed and food cooked in springs. No spices necessary, sulphur smell added, all natural.

But it was not until the beginning of the 20th century that technology made it possible to harness the high-sulphur, corrosive water to use it for what is most needed on an icey island: House heating. Reykjavik happens to lie on one of the hotter spots of Iceland, on the Reykjanes ridge, and hundreds of wells bring hot water up and into houses.

Since then, coal use has steadily plunged, to virtually zero today. In its place are both hydroelectric Power – Iceland gets tree quarters of its electricity from hydroelectric power, much of which goes to aluminium smelters – and really hot water.

Hot springs are everywhere on Iceland, which heat houses, and every little Redneckfjördur has its own outdoor bath. But only in the last decades have Icelanders also harnessed the really hot areas below to make electricity. Such high temperatures occur only in the rift zone where volcanism goes on today; on the Reykjanes ridge, and along the rift zone along the central-eastern part of Iceland. Today, six geothermal power plants produce one quarter of Iceland’s electricity. 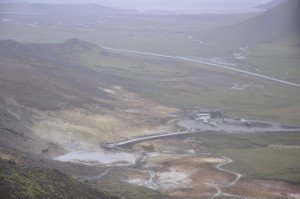 The geothermal field at Krysuvik is close to Reykjavik, and therefore often full of tourists. Some of the first attempts to use geothermal heat in Iceland ended when the well pipe exploded and created the crated just to the left of the visitor platform. 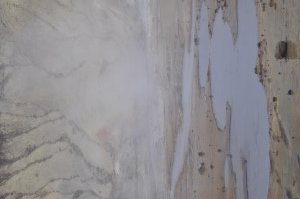 The Krysuvik mudpots look a bit like a rainy day on Mars. Include smell worse than my mountain boots after a week of walking. Krysuvik was earlier mined for sulphur.

It sounds easy; drill some holes, let the hot water flow up, send vapour through a turbine and, voila! – electricity. In the real world, it is a little bit more complicated than that… The first attempts to harness power from hot springs often ended when the pipes blew up from steam explosion, or the sulphur corroded the pipes in no time. To keep the really hot water under control, it took drilling into deep fracture zones, and development of special resistant steels to withstand the corrosion. 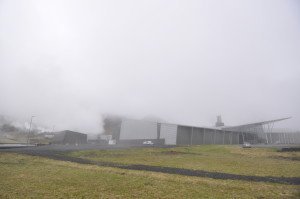 No, it is not the castle of the Joker. It is Hellisheidivirkjun, Iceland’s largest geothermal power plant, open to visitors to see how the energy within is captured in modern times.

Hellisheidivirkjun – the Hellisheidi works – is the newest geothermal powerplant in Iceland, opened in 2008. It produces annually more than 300 MW of electricity and another 400 MW of heating hfrom 30 boreholes. The hot water travels in pipelines to the powerplant, where steam is first separated from water. The steam then goes through heat exchangers, where it heats up fresh-water to steam, which finally goes through high-pressure turbines to create electricity.The steam from the cooling towers shrouds the powerplant building in fog, and makes it look like the castle of an evil movie villain… 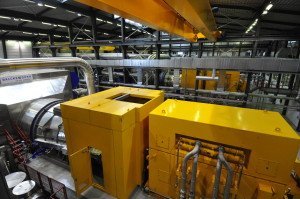 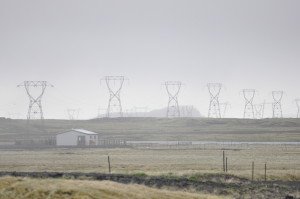 Transformers are coming! Like silent giants, pylons hold in their arms the cables that distribute electrical power across from the power plant to Reykjavik. 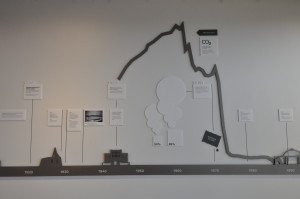 Wall decoration in Hellisheidivirkjun that shows how the emissions of CO2 in Iceland have plunged as geothermal has risen.

Iceland was an extremely poor country until the turn of the 20th century. Since then, they have built a modern society from fish, energy and pure stubbornness. And now you know why stubbornness was a the most important ingredient: it took quite a bit of stubbornness to capture the energy within. 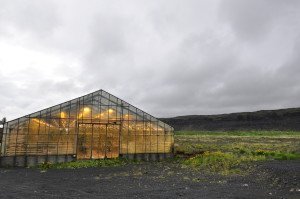 Cold and barren outside, warm glow inside: A greenhouse in Hveragerdi. 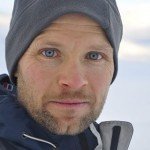