The Ediacara Hills is a hot, dry area in the middle of nowhere in South Australia. A place people go if they must, like for mining for uranium and other metals, and leave when the mine runs dry or metal prices are low. Ediacara is dotted with abandoned mines.

In 1946, the Australian government sent Reginald Sprigg to inspect the mines, and investigate if they could be opened again with modern mining methods. Sprigg was one of those geologists who had picked up a fossil as a young boy, and immediately knew what he would be when he grew up. One day in Ediacara, while eating his lunch, he picked up another piece of rock with a fossil in it.

The fossil looked like a small, oval disc with a stripe across, and tiny ribs radiating out on each side. It was completely different from anything Sprigg had ever heard of. The closest he could get was a jellyfish, but soft jellyfish very rarely become fossils.

And it should not be there. It was just too old.

Dickinsonia, the first of the fossils from Ediacara, with the characteristic line along the center and radiating ribs. Photo by Smith609 at English Wikipedia [CC BY-SA 3.0 (http://creativecommons.org/licenses/by-sa/3.0/)]

These rocks were thought to be earliest Cambrian in age, or latest Precambrian. They were not supposed to contain remnants of life. In 1946, the first life – a.k.a. fossils – were known only from the Cambrian, when it suddenly appeared as the famous trilobites, and shells, corals and other invertebrates. This sudden appearance of higher life is famously known as the “Cambrian explosion”, although we now know that the various organisms appeared through a span of around ten million years.

But before that, nothing.

Sprigg brought a collection of the Ediacaran fossils home, but because they possibly were earliest Cambrian, the fossils were waved off as belonging to the “explosion”, even if they looked completely different from what was known.

But Sprigg was now certain he had something really new to science. Or, really old, and very different from anything before. But science was not interested. Neither was Nature, the prestigious scientific journal. Sprigg submittet a paper where he described the fossils, but Nature rejected it.

In 1948, Sprigg travelled all the way to London, to present the fossils to the International Geological Congress, but to deaf ears and disbelief.

Fossils were not supposed to come from rocks older than the Cambrian, so older stuff was by definition not fossils. End of discussion. Fed up of the scientific resistance, Sprigg put the Ediacaran fossil thing aside, and went on to commercial geology. He founded a geological consulting firm, and also got involved in oil and gas exploration, which made him a wealthy man.

Ediacaran fossils were more or less forgotten until 1956, when another fossil turned out, from the Charnwood forest in England. The 15 year old girl who found it was not believed, but the next year another 15 year old, Roger Mason found more fossils, of something that looked like young fronds. And this was not from some g’day mate down, under, but in civilized England, which had been duly mapped by the gentlemen of the British Geological Survey. 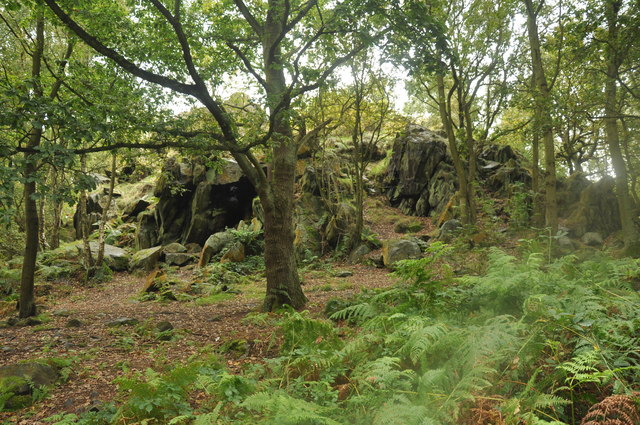 The geological society in general and The Geological Society of London in particular, could no longer deny that complex life existed in the late Precambrian.

But what were they?

Ediacaran fossils were different from anything seen before or after. Charnia masoni looks like the imprint of a thick fern leaf, only that it is around 300 million years too early. Charnia and its relatives in the Rangeomorpha fossil group was probably benthic, attached to the sea floor and could not move.

Sprigg’s fossils mostly belong to the genus Dickinsonia, quite prosaically named after Ben Dickinson, his boss at the mining authorities. Dickinsonia looks like a kind of elliptic, imperfectly squeezed out pizza, with a line aling its main axis and radial ribs out from it. Dickinsonias could be from a few centimeters up to one meter in size, the latter species aptly named Dickinsonia rex!

Dickinsonia could move around, and thus had some kind of muscles: An imprint of the disc Dickinsonia shows three similar impressions, left like fingerprints, when it moved around. They have been suggested a kinds of worms, flatworms, or cnidaria (the phylum containing coral, anemones and jellyfish); clearly they were a kind of animals, but we don’t know which kind of animal.

Spriggina – discovered in Ediacara in 1958 and named after Sprigg – may look like an early trilobite, with a head and a segmented body, although it had no shell or legs. Nevertheless, its shape has made it a candidate for a very early arthropod, the root of the phylum containing insects, crabs, scorpions, trilobites and other invertebrates with shells. 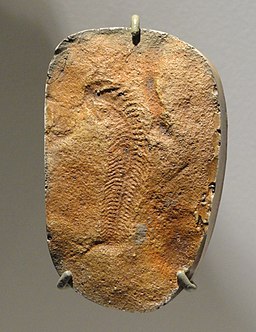 Spriggina, a worm-like creature with a possible head on the top – the ancestor of trilobites, but without a shell? Photo by Daderot/Wikimedia Commons [CC0].

Cyclomedusa looks slightly like a jellyfish – a medusa – with concentric rings, or a cut through a tree trunk. They were first thought of as, you guessed it, jellyfish, but today they are regarded as benthic bottom dwellers, probably some sort of anemone like polyp, or that the shape was made by a microbial colony. 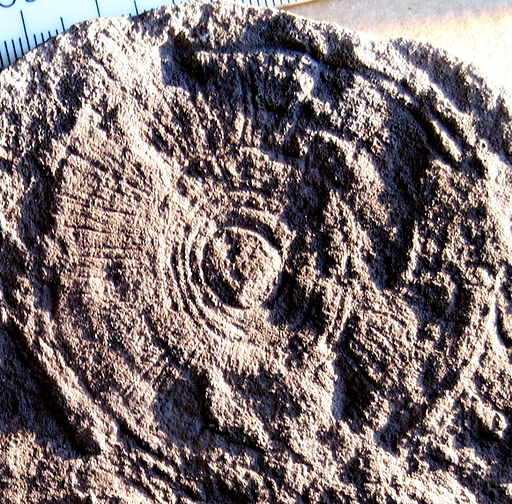 Cyclomedusa – probably not a jellyfish at all but a colony of algae. Photo by Verisimilus at English Wikipedia [CC BY-SA 3.0 (http://creativecommons.org/licenses/by-sa/3.0/)].

The Ediacarans were clearly a diverse bunch of organisms, which were not all of the same kind, but possibly belonged to several different phyla. They do not show any sign of mouths or feeding organs, so most likely they breathed and nourished directly through their outer skins. Neither did they have any kind of hard tissue. Ediacarans were clearly some kind of animals, but the palaeontologists fight their version of civil wars – a.k.a. publishing papers where they call the opponents “controversial” – on what they were.

Another peculiar thing about the Ediacarans is that the fossils often come from sandstones. Fossils in sandstones are usually bones, because soft tissues are destroyed. Soft tissues rot or simply gets eaten. In the Ediacaran sea, there was clearly no-one around to eat them, but how did they get preserved? It seems that the seafloor of the Ediacaran was covered by mats of algae, almost a blanket of green slime, which the Ediacarans left their imprints on, and which then captured the imprints.

The Ediacarans stayed on Earth for some 70 million years – that’s longer than since the dinosaurs left and until now! – and went away. They left no descendants. There is nothing to compare them to. They were a blind alley of evolution. Younger Ediacaran sediments often contain burial tracks, which show that wormlike creatures had evolved – worms, which could start eating on the algae mats. And when other organisms developed hard shells during the Cambrian, and thus became able to swim and bite, the Ediacarans were, probably, literally eaten to extinction, and the algae carpets with them.

The Ediacaran sea, with Charnia waving the the currents and Dickinsonia crawling around on the sea bottom, among colonies of Cyclomedusa. Image by Maulucioni, based on previous work by Ryan Somma [CC BY-SA 4.0 (https://creativecommons.org/licenses/by-sa/4.0)].

Today, the fossil site is protected, and in 2004, the Ediacaran also became the official name for the period just before the Cambrian. By then, Ediacaran fossils had turned up many places around the globe, with some of the best coming from the cold shores of the White Sea in northwest Russia.

Ediacarans from New Foundland have become especially famous, and even had the honour of being presented by David Attenborough on the First Life TV series. They are special because they were buried by fine volcanic ash, which preserved them in exquisite detail, on the rugged, wind-swept peninsula called Mistaken Point. Dating the ash has shown them to be the oldest of the Ediacaran fauna, around 570-580 million years old, around 20 million years older than those from Ediacara and the White Sea. And, they lived probably not near a sunny beach, but in the dark of the deep sea, being unique even among the unique Ediacarans. Some of these fossils are familiar, but there are also some which are special for Mistaken Point. Most notable are the “spindles” and “sea ferns”, which look like some weird kind of fern or millipede. May be they lived attached to the sea bottom, like sea lilies, rather than crawling around on the sea bottom. 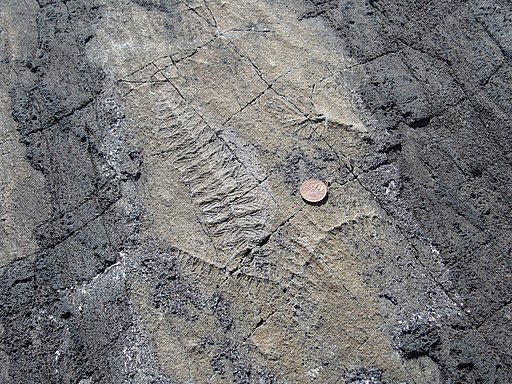 In fact, the first Ediacaran fossils on New Foundland had been found as early as 1868, by the Scottish geologist Alexander Murray, and by the Canadian Elkanah Billings in 1872 . But, being in the wrong place in the stratigraphy, they were dismissed as sediment concretions. And in 1933, Ediacaran fossils were found in Namibia, but they were assigned to the “right” age, the Cambrian, and then forgotten, until they were brought back by the discoveries in Australia and England.

Science often takes a long time to adjust the map after the terrain. It must be so, because the world is ripe with controversial claims. Strong claims need strong evidence and the time to investigate it.

But, the story of the Ediacaran fauna is a strong reminder that science must not dismiss evidence, simply because it does not fit with the dogma of the day. Geologists are as vulnerable as any to fit observations into their models. The fossils that should not be there were dismissed as being younger, or not fossils at all, before they finally were allowed to write another fascinating chapter in the story of life.

The Ediacarans tell us something important: Evolution was never a straight line, a marching towards the end goal of making Homo sapiens capable of making croissants and computer viruses. Evolution was in many way random, a series of some hit and much miss, before it stumbled upon making us.

If you are Norwegian, like me, you may like to know that we have Ediacarans in Norway as well, on the Digermulen peninsula in Finnmark, in very North Norway. An international research group has dug up a long string of fossils that cover the millions of years leading up through the Ediacaran and to the Cambrian border.

2 responses to “Ediacarans: The fossils that should not be there”