In the previous posts, we looked at how the big theater of plate tectonics has created both ice ages and hot greenhouses on Earth. Now, we will get back to the ice age, the one we are in right now.

The current warm period, with a flourishing civilization, is really only one of several interglacials, warm periods in between the glacials when ice caps grip most of North America, Europe and Asia. What makes the swings between warm and cold within this ice age? Those swings happen too fast to be due to tectonics. The glacials and the interglacials follow an irregular, but clear pattern: Temperature gradually goes down, over a period of around 100000 years, then rapidly climbs up. The answer came…from space.

Around 25-20 000 years ago, ice covered most of Northern Europe and Asia. A similar ice sheet covered North America. This was the last glacial maximum, when the Milankovitch cycles made the Earth around 6 degrees C colder than today.

Those temperature changes were controlled by the Milankovitch cycles. These are regular changes in the Earth’s orbit, which creates small variations in how much energy Earth receives from the sun, and thus flips the climate back and forth between glacials and interglacials.

There are several Milankovitch cycles, named after the Serbian astronomer Milutin Milankovitch. He was not the first to postulate such mechanisms, but he proved them, through painstaking manual calculations.

The first cycle is around 100 000 years long and controlled by the Earth’s orbit around the sun. The orbit is a slight ellipse, but the shape varies from nearly circular to more elliptic on a scale of around 100 000 years. These small changes in eccentricity of the orbit and in the distance to the sun amplify the Earth’s seasons: The more elliptical orbit, the more intense summers and colder winters.

The Earth’s orbit around the sun is a slight ellipse, much exaggerated in this image. Eccentricity is the term for how stretched the ellipse is: The more stretched, the more extreme are our seasons.

The second cycle is changes in obliquity, the tilt of the Earth’s axis. This tilt creates the seasons on Earth: When the northern end of the earth’s axis through the poles points towards the sun, the northern hemisphere receives more energy and we have summer here north, while the southern hemisphere has winter. Half a year later, the southern end of the axis points towards the sun, and the southern half of the globe go to the beach, while we go skiing. If the axis had been straight up, there would not have been any real seasons, only the tiny variations in the ellipse shape of the orbit.

The axis tilt varies between 22.1 and 24.5 degrees over a period of ca 41000 years. More tilt makes summers warmer and winters colder, because the top of the Earth points more directly towards the sun and receives more direct sun rays in summer, while southern end points more away from the sun.

Obliquity is the term for how much the Earth’s spin axis tilts from the vertical. This tilt creates the seasons on Earth. The angle varies through time; the greater tilt, the more extreme seasons.

The third cycle is of the axial precession and is exactly 25,771.5 years. Axial precession is the direction the axis points towards in the sky. Because the orbit is slighly elliptical, the north pole axis points towards the sun when the Earth is at the far end of the orbit (aphelion), and the south end towards the sun when we are closest (perihelion). South hemisphere summers are therefore hotter than north hemisphere summers. Today, the axis through the North Pole points towards Polaris, the Polar Star. But in a little less than 13000 years, the north pole axis will point towards a different place in the sky, and towards the sun in summer, and we will have the most intense summers. 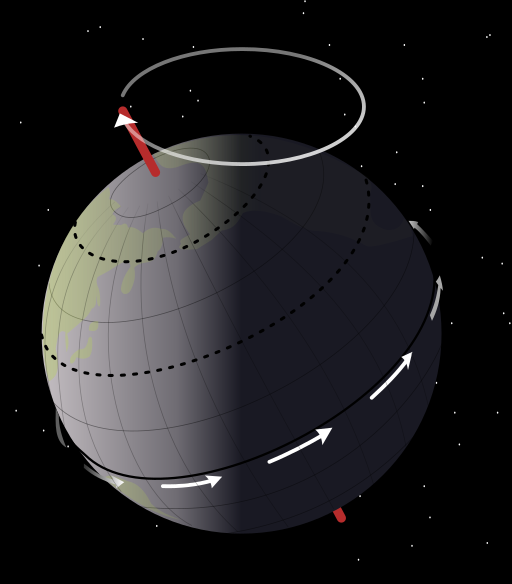 Axial precession: The direction in space, towards which the Earth’s spin axis points. Precession changes through time, and thus also if e.g. the northern hemisphere points towards the sun, and has summer, when the Earth is close or distant to the sun.

The fourth is the apsidal precession cycle of 112 000 years, which means that the slightly elliptical orbit itself rotates around the sun, so that the far end of the ellipse points towards different directions. The result is also here that the seasons will be at different places in the orbit, and their lengths and intensity change. In practice, the two precession cycles work in tandem, and the effect of the fourth cycle is to shorten and stretch the effect of axial precession to vary between 20,800 and 29,000 years.

Apsidal precession: The Earth’s orbit itself rotates around the sun.

This was the TL;DR of the complex Milankovitch cycles, but you get the point: Working together, they fine-tune how much heat reaches the Earth, how intense the seasons are – and then if glaciers grow or shrink and how much of the sea is tied up in ice caps. The Milankovitch cycles have been going on as long as the Earth has circled the sun, and created climate variations, but their effect has been most pronounced during the ice ages.

Climate sceptics often point out that in the changes between glacial and interglacial periods, temperatures rise or fall first, and CO2 then follow. This is true, and is because CO2 is more soluble in cold than warm water (in sciencey; the solubility of CO2 in water is inverse to temperature). When oceans get warmer, e.g. due to the Milankovitch cycles, they will expulse some CO2 into the atmosphere, a relationship known as Henry’s law. When oceans are cold, they can store more CO2. 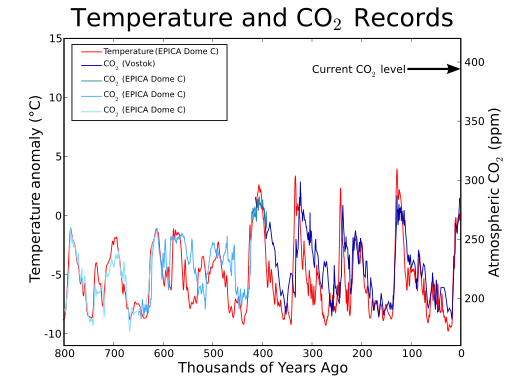 A graph, compiled by Wikipedia, which shows how CO2 followed temperature during the variations between glacial and interglacial (the very cold and the temperate, like now) periods during the ice ages.

So far, so good, but not the implicit message that also the current rise in CO2 is due to naturally rising temperatures. You will already have noticed the obvious difference the ice age variations and now:

The ice age exchanges were only of CO2 that was already there. Cave men did not burn coal. We, however, have burned coal since the industrial revolution, and oil the last hundred years. Not even the most hard-nosed climate skeptic can deny that we thus have poured in lots of CO2 directly into the atmosphere. This time is different because it is the only time fossil fuels have been burned the way we do.

The Milankovitch cycles also tell us another serious lesson: Even small variations in temperature can have serious impacts on climate. There will always be natural changes in climate and we will have to adapt to these changes. Changes on the time scale of human civilization is the topic of the next and final post.


Climate change is a hot, political and sensitive topic. Comments, corrections and disagreements – a.k.a. peer review in academic – is welcome in the commentary field. Please stay respectful and on topic. Trolls, conspiracy theorists, Climategate-truthers etc. will be deleted and blocked without further ado – no questions asked, no answers given. My blog, my rules.

One response to “What geology can teach us about climate change: The Earth’s drunkard walk between warm and cold”