If one word could sum up the Mediterranean island nation of Malta, it would be “limestone”. Limestone has shaped the islands’ topography, their economy and possibly black bank accounts. It has also made Malta a paradise for carbonate geology studies – and diving.

In this article, I will take a look at them all. But, let’s start with the (literally) fundamentals: The geology itself. Get ready to get nerdy.

Malta lies on a large carbonate platform that stretches northwards from Africa and also comprise Sicily. Geo-wise, Malta is thus a part of Africa, and the islands are just the youngest tops of the rocks that peak above sea surface. They were deposited from the Upper Oligocene through Upper Miocene, from ca 20 to 8 million years ago. On the geological time scale, Malta is a toddler.

The lithostratigraphy – geo-speak for making a system of the rock layers – on Malta has three main groups, and their development was controlled by changes in the sea level of the Mediterranean through time. Sea level, in turn, is the result of the complex interplay of how much water came through the Gibraltar strait relative to evaporation, and by sediments dumped from the erosion of landmasses lifted up when Africa collided with Europe to produce the Alps.

The lower of the three levels is the Lower Corralline limestone, made up of carbonate sand and gravel, mixed with shell fossils. The carbonate sediments were originally living organisms, such as coral reefs, shells, or as very fine-grained plankton – probably on what now is Sicily. Then, these rocks were eroded, flushed south to Malta by high-energy waves and currents, and re-deposited as sand and gravel in shallow water. Some beds in the Lower Coralline consist nearly solely of shell fossils, ground to fragments by the eternal wave movements.

The Lower Corraline limestone is hard and resistant to wear and tear, and form steep and vertical cliffs along the coast. On the coast northwest of Marsalforn on Gozo, it has beautiful crossbeds; where each bed consists of thin layers that dip in the direction of the current. It was Murphy’s Law 2.0 that I saw these beautiful features from a wet diving rib where carrying the camera would be foolish. Arrgh!

Coarse crossbeds and karst holes in the Coralline limestone, close to the Azure window.

Fossil sea urchin in the Coralline. 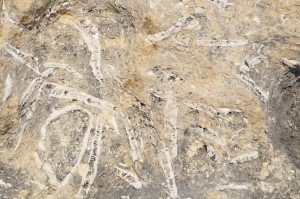 The Coralline limestone can consist nearly solely of fragments of Shells.

The middle interval is the soft of the trio: The Globigerina limestone is composed nearly solely of planktonic carbonate, and has its name from the Globigerina foraminifera, a very tiny crustacean. Pure and fine-grained, this limestone has a distinct yellow-greyish color. It is used to construct buildings, aquaducts, pavements, basically everything, and Maltese towns therefore have the same yellowish-greyish color from tip to toe, as if everything was built by Lego bricks of the same color. Because limestone slowly dissolve from acids in rain, some buildings have had parts of their walls washed away.

The limestone is pure because it was deposited deep, probably 200 meters, where very few organisms would mess it up before it consolidated to rock.

Marsalforn bay, with houses residing on the soft Globigerina limestone. Do not invest in seafront real estate if your investment horizon exceeds a few hundred years.

Yellow-greyish Globigerina limestone in buildings as far as the eye can see. The image is taken in Gozo’s capital, whose name in Maltese is Ir-Rabat, but was renamed to Victoria to suck up to a certain Queen. In the background, the mighty Ta’Pinu cathedral.

However, periods of shallower water interrupted the deep calmness, and with shallow water came organisms that buried in the sediments. Their burials and tunnels, “bioturbation”, in geo-speak, left coarse dark nodules that almost entirely make up some beds. My muggle – a.k.a. non-geologist – travel mates were quite surprised to learn that the dark blobs in the light rock were literally old faeces from slimy creatures that lived in the sediments before they became hard rocks; they ate not-yet-solidified carbonate rock in one end, and leaving brown blobs at the rear.

The longer a layer is left in shallow water, without being buried by new sediments, the more time the creatures have to make burials. In the bay of Marsalforn, our base at Gozo, one can see how a homogeneous limestone gets more and more burials, ending in a layer that is nearly only burial nodules – before sea level suddenly rose again, and abruptly changed to only yellowish again.

During lowstands, burying organisms create tunnels in the sediments; most close to the surface. some deeper. Then, fast sea level rise drowns the burial organisms, until new ones start over again at a shallower level.

Benches in the Globigerina limestone, that highlight how periods with calm deposition have left light limestone with litte bioturbation, interrupted by low-stands with heavy treatment by the slimy creatures.

Hard layers composed nearly solely of burials, in the harbour of Marsalforn. This is some solid accumulation of old poo!

A beatutiful spiral burial in the Globigerina limestone, including the mandatory lens cap for scale.

Above the Globigerina is the thin Blue Clay. It is the softest rock on Malta, but very important, because it consists of very fine grained particles of clay minerals and carbonate, which make it impermeable. It catches water that sinks down through the porous rocks above, and forms the floor of a precious freshwater table.

Finally, the Upper Corallian limestone is a lookalike, although thinner, of its older sibling and with the same high-energy deposition environment. On Gozo, this hard limestone stands out as caps with steep cliff sides and flat tops, above the softer rocks beneath. Therefore, citadelles for defense reside on top of these high parts of the island. Actually, after an Arabian pirate attack in 1556 kidnapped nearly the whole population, the remaining gozitans for a long period stayed inside the citadels during night and went out only to work on the fields during the day.

By now, you have already seen glimpses of how the geology of Malta influence people’s life. Let’s take a closer look.

Water has always been scarce on dry Malta. It sinks through the porous limestone and therefore, the country depends on ground water. The largest fresh water body is at level with the sea, in the Lower Coralline: The lighter fresh water floats on the salt water. But, heavy use of the ground water seriously threatens the future of the fresh water supply. Much fresh water comes from by reverse osmosis of ocean water, but the energy-intensive, oil-fueled process costs five times as much as ground water, and therefore many illegal wells tap into the ground water reservoir. As a result of the water scarcity, Malta produces only around one fifth of the food it consumes, according to the wicked pedia.
Malta has no natural resources. No metamorphism, no volcanism circulated fluids saturated with metals. No ore, no coal, no geothermal, no energy resources. Sicily with the famous Mt Etna and other active and extinct volcanic fields lies just to the North, and the volcanic Pantelleria island to the SW – but on Malta, nothing.

Enter oil? Malta lies on the Pelagian block, a northward extension of Africa that also comprises large oil fields on Sicily. Just to the west is Tunisia and to the South is Libya with their well known large resources. Thus, there is no reason Maltese waters could not hold hydrocarbons.

The first exploration well, Naxxar 2, was drilled onshore back in 1959. Altogether 12 wells are drilled on- and offshore, the last in 2002. Offshore Alexia 2 found oil in 1984 and onshore MTZ 1 found gas in 1999. These were both technical discoveries (oil speak for “too small to make money”), but important as they proved a working petroleum system.

In recent years, a number of oil companies have got acreage offshore Malta. A first well, Hagar Quim 1, will be drilled south of Malta in 2014 by Genel Enerji and its partner Mediterranean Oil and Gas. These wells will go into deeper and older rocks than those exposed on the islands themselves, but that are analogues to fields in Libya, Tunisia and Sicily. Hagar Quim 1 searches for a Lower Eocene to Paleocene carbonate-clastic reservoir. Upper Cretaceous reefs, and structural traps on Late Triassic-Early Jurassic platforms are other potential targets.

Finally, let’s, literally, dive into the lighter sides of Maltese life: That under water. Malta, and especially Gozo, is regarded as the best place to dive in the Mediterranean. Malta has protected its fish stock fairly well. Karst caves and sinkholes along the coast create spectacular landscapes above and under water. Among them, the Cathedral cave is a huge dome with access only below sea surface. Breaking the surface inside the cave, the dome is laminated by sunrays through small openings in the wall. Any sound, word, wave echoes from the walls. Then comes the swim out again, through the large, mighty door opening into the big blue…

Even more spectacular is the Azure window. It is a sinkhole, where the sea has also torn away the lower part and connected it to the sea. The upper part consist of a hard ground, a well cemented fossil rich layer, and creates a natural rim around the deep pool. A popular escape destination, the Blue Hole is chock full of bathers in the upper part and divers at all levels. Just close is the large arc, standing on a pillar in the sea. Once, it was likely a cave, now only one last pillar is standing. It was a mighty experience to dive into the big blue hole, and then see the shadow of the arc above, with waves smashing onto the pillar. Below the arc, the sea floor was covered with boulders that fell down from it during winter season, a reminder that the pillar is slowly being torn away. Geology may look eternal, but is certainly not…

The Azure hole with the arc in the background. Note scale bar in bikini on the tableau to the left.

From above the Azure window looks like a pool, but the outer ring is just a brim above the Ocean.

29 responses to “Malta: A country shaped by limestone (and a bit of very old poo)”