Santorini, in the eastern Mediterranean, is a classic Greek island destination. Dinner at Santorini, when the sun sets over the lagoon deep below, is frequent in listicles over “10 most romantic things”.

Santorini consists of three main islands, around a deep inner lagoon with steep walls. The islands are really the rim of a large volcano crater, a caldera (from Spanish, “cauldron”). In the middle is a small island with a volcanic cone. But Santorini has a violent history.

Just by looking at it, even muggles can get a feeling for what once happened here: Santorini was once ground zero for, probably, the third largest eruption in historical time (after Tambora and the Taupo eruption on New Zealand ca 180 CE).

Santorini’s location in the middle of the Aegean sea, with Crete to the south and the Greek mainland to the northwest.

Three and a half millennia ago, Santorini was a trade center for the advanced Minoan culture. The Minoans had their base on Crete, which they dominated, and they had cultural influence on the Greek mainland. Their large fleet connected settlements across the Aegean sea, and the large lagoon inside the Santorini ring was a perfect harbour.

And then, around 1670 to 1540 BC – archaeologists and radiometric dating do not entirely agree – the volcano in the middle of the caldera lagoon woke up and wiped out the Minoan civilization.

It started with rumbles, may be several years before the decisive blast. Earthquakes shook Akrotiri, the Minoan city on Santorini. (Or, more precisely; the current name of the place of their city). Many buildings in the city got damaged and had to be repaired. But no sooner than the city was back in shape, the volcano woke up, and heaped ash upon its dwellers.

The Akrotirians soon realized that this was not a place to stay. They brought their valuables onto their ships and fled. Men, women, children, left their city behind, to be buried in volcanic ash.

Still, they left too late.

Santorini’s characteristic ring shape, wrapping around the caldera, and witrh the small Kamenei islands in the center – the location of the volcano.

The Santorini volcano built its crescendo to the grande finale – and blew itself to pieces. The explosion sent a tsunami out across the Aegean sea. It drowned the escaping Minoan fleet, and flushed a tsunami onto the shore of Crete. It crushed ships, destroyed harbours, wiped out crop fields.

How many people the tsunami killed, we can only guess. But it was the finito of the Minoan civilization. With Akrotiri trading city gone, the fleet drowned and both the infrastructure and food supply on their main island of Crete damaged, the Minoans could no longer do their business of dominating the seas. The Minoan civilization declined and handed the relay stick of civilization to Greeks from the mainland, the Myceneans. Then came The Old Greeks.

The Old Greeks, as we know, invented science and democracy and philosophy and the rule of law. If Santorini had not exploded, the Minoans, not the Old Greeks may have dominated Greece, and all those good things would never have emerged.

Santorini, indirectly, made the Western civilization.

The story told above, of how Santorini started to rumble, spewed ash, how the people escaped and yet drowned, is of course not the known truth. Rather, we modern people puzzle it together from archeological and geological discoveries.

But we do know that Akrotiri was hit by earthquakes. Its buildings – those, which have been dug up from the ash – have damages and fractured walls, like earthquakes make. But the damages are repaired, so some time clearly passed between the quakes and the eruption.

Strangely, no dead bodies have been found in Akrotiri, at least not in the parts that are dug out. The houses were left in order, but little valuables remain. Therefore, we believe that its citizens managed to organize an ordered escape. But remains of the fleet have never been found, which is why it may have been taken by the tsunami.

Or, may be the remains are simply buried beneath sediments just offshore Crete or another island, and are just waiting to be found. If the wooden ships have not rotted away.

The tsunami itself is for sure. The coarse, rubbly deposit that a tsunami makes is found on the north coast of Crete, and it includes fragments of pottery and building material. The wall of water may have been 150 meters high.

The tsunami happened because Santorini is an island, and the caldera filled with water. When the volcano spewed out lava and ash, the outgoing rocks left a void in its magma chamber. Naturally, the volcano collapsed into the void. The collapse not created a big hole where once had been a volcano, and lots of fractures.

Sea water flowed in through these fractures and down into the hot deep, where it turned into steam – and blew the top off. The most famous example in modern times is the 1883 eruption of Krakatoa, a volcano island between Java and Sumatra. Krakatoa is famously known as the loudest explosion in modern history and killed at least 35000 people by ash fall and, mainly, tsunamis.

Akrotiri today lies beneath up to sixty meters of ash. Two small volcanic islands have grown in the middle of the caldera during the more than three millennia since the catastrophe. Santorini is still regarded as an active volcano; there are fumaroles, and the last minor eruption was as late as 1950.

But did Santorini really create the modern world? 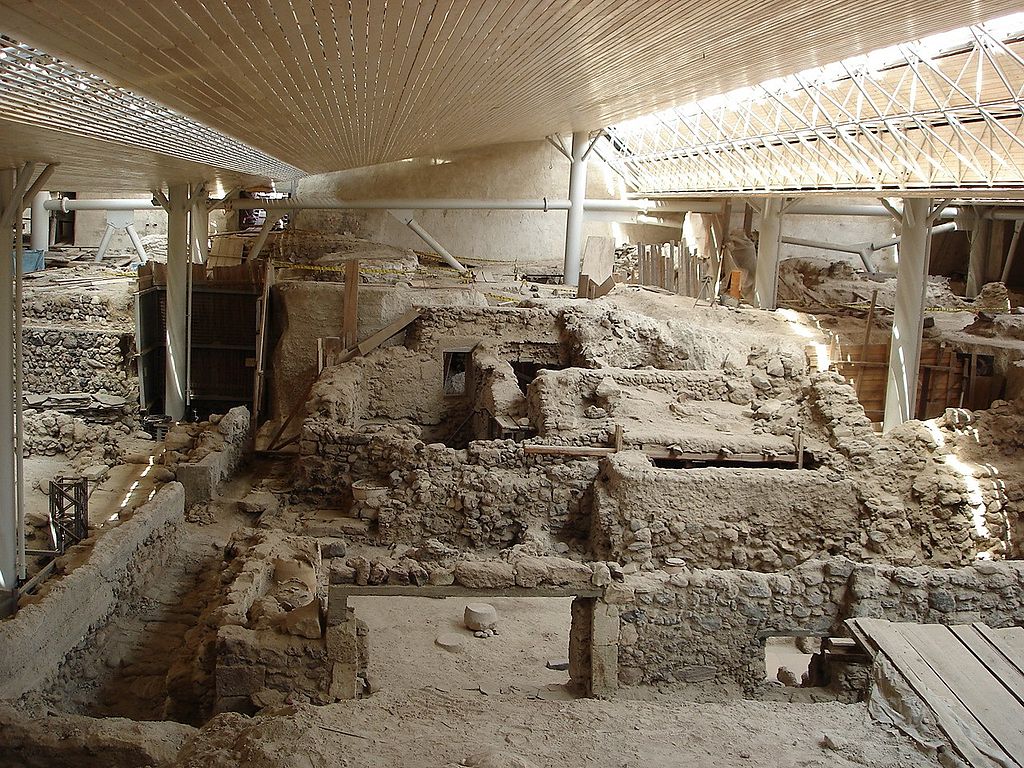 The Myceneans were the first large civilization on the Greek mainland and consisted of heavily militarized city states. With the demise of the Minoans, they were able to also conquer Crete. Without the Santorini eruption, may be the Minoans would, through time, have taken over Greece instead? Without the Santorini eruption, no classic Greek philosophers, no democracy, no science?

May be. But, again, history tends to be complicated. The Myceneans themselves caved in around 1100 BC, from invasions and general political unrest in the Eastern Mediterranean. 1100 BC, there was still around 500 years to go to the birth of Thales from Milet, in 624 BC, and 200 more to Plato, 428 BC. Much history and many wars took place in between, with opportunities for history to take other ways.

It is probably more appropriate to say that Santorini created a power vacuum, which in the course of history made the Old Greek civilization possible. On the other hand, who knows what the Minoans themselves might have developed of philosophy and science, if they had persisted for another thousand years?

Santorini’s main lesson to us is thus not that it pushed history in one particular direction, but that the course of the human civilization does not follow a line towards any goal. Rather, it takes random turns and twists – and many of these twists are the acts of nature.

Santorini undoubtedly changed the antique history of Greece. But the only thing we can know for sure, is that without the volcano catastrophe, Europe would have been different.

How, we will never know. 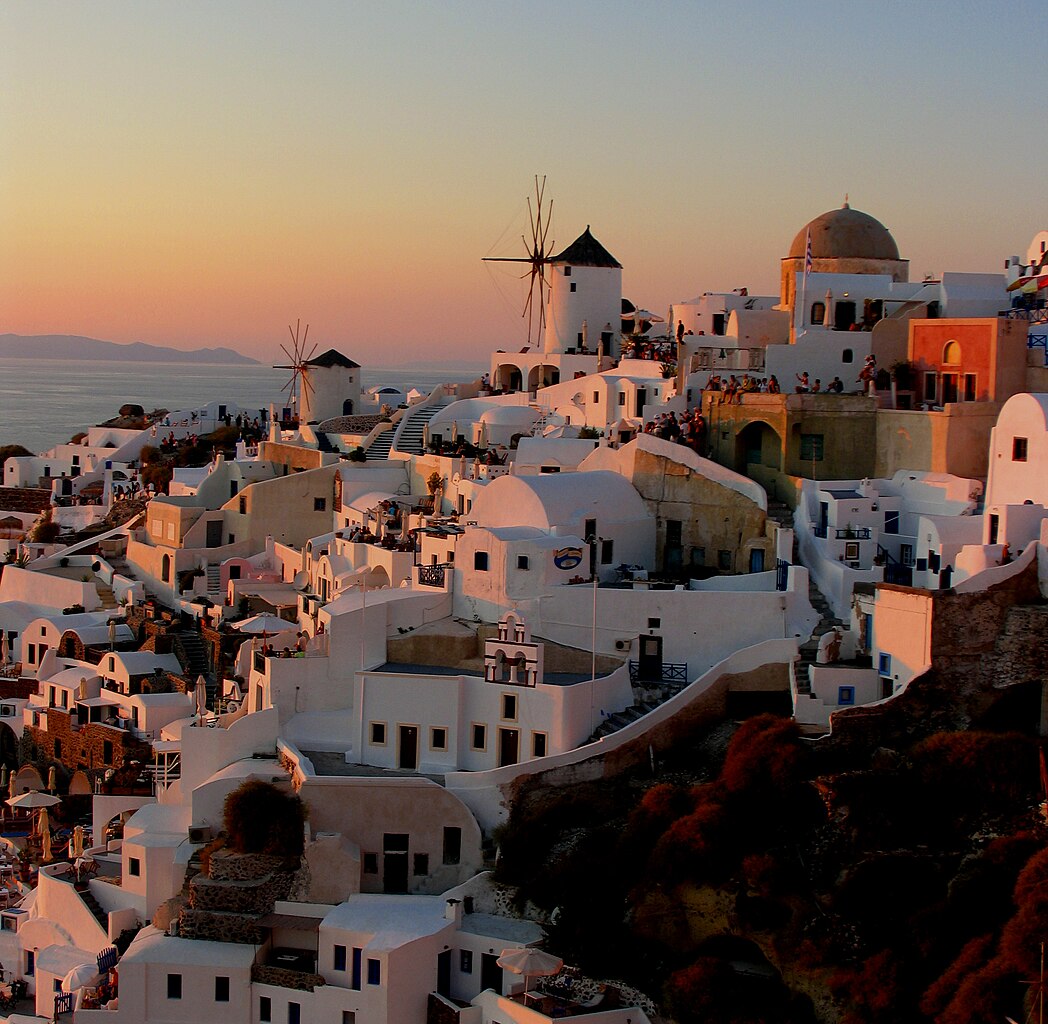 Sunset at Santorini. Certainly one of the 10 most romantic things.
(Image by karol m under Creative Commons Attribution 2.0 Generic license).

This post is partly based on the book Eruptions that Shook the World by Clive Oppenheimer.