1816 was the year without summer. It was the year when rain poured down across Europe. Potatoes rotted in the fields and the grain never ripened. Europe already struggled to recover from the carnage of the Napoleon wars, with infrastructure and agriculture in the shambles, and grain stores running low. Hunger stroke, farmers fled from their soaked fields and flocks of beggars besieged city gates.

The next two years were not much better, with wet and cold summers. The winters were mild, but that could not help the hungry. These three years were almost one long, muddy, wet fall.

Peat, many places used for heating, became too wet to burn. Typhus epidemics spread when people huddled together in beds to keep warm, or in the crowded poor houses.

In the Alps, where all this rain fell as snow, glaciers expanded so much they ate whole villages.

The years 1816 to 1818 was the last big subsistence crisis in Europe, and while the wake of the Napoleon wars worsened it, the cause was nature itself. What had happened?

The year before, on April the 10th 1815, the volcano Tambora had exploded.

Tambora was the landmark of Sumbawa island in Indonesia. It was a classic volcano cone, rising elegantly towards a peak in the sky above a peninsula north on the island.

The address of heaven and hell: Sumbawa island belongs to the long island chain of Indonesia, and lies east of Java. The Australian plate sinks under the Asian plate in the trench on Indonesia’s south rim. The subducted slab melts, rises as hot magma, and erupts on the surface. It makes Indonesia the country in the world with most active volcanoes.

The peninsula belonged to the kingdom of Sanggar, where the people grew rice, beans and spices. Sanggar was also a trade center, where spices and cotton went out in exchange for cattle, salt and commodities from all the way to China. The lush, green island also had a dark side: An extensive trade in slaves to work the fields.

Tambora had been dormant for a long time, but for some years, it had begun to rumble, and send out huffs and puffs. On the evening if April 5th, Tambora sent flames to the sky, accompanied by thundering noise. For three hours, the fountains lighted up the night, until the rain of ash blocked the sight.

The euption ended as sudden as it started. The next morning, the poor sumbawans had to start the cumbersome job, to clean the rice of sticky volcanic dust. Tambora continued to huff and puff some ash, but the big danger seemed to be over.

Sumbawa island, with Tambora as the landmark on the Sanggar peninsula.

In the evening of April 10th, Tambora unleashed Hell. Fountains of light shot from the summit, rivers of lava down poured down its side and hailstorms of pumice drowned or incinerated whole villages on the volcano’s flanks. At least ten thousand people perished within the first hour. Pyroclastic flows, a heavy mix of burning hot ash and gas, ploughed down the hills and buried everything in meter thick ash. Tsunamis washed onshore and drowned rice fields. Finally, when the magma chamber was empty, Tambora collapsed into itself.
In three hours, the fireworks were over. Pyroclastic flows continued the next three days, under a sky still dark under a lid of ash.

The Rajah of Sanggar himself was one of few who escaped, together with his family. But his kingdom was blasted away. When the dark veil finally lifted, the survivors looked out at a moon landscape of volcanic ash, fallen trees and dead corpses. The rice fields were drowned in mud. Famine and epidemies followed. Altogether, around eighty thousand islanders would die from Tambora’s blast (although the number is uncertain). Tambora’s picture-perfect peak was gone and replaced by a six kilometers wide crater, the caldera we can see on Google maps. Sumbawa has never really recovered from the cataclysm.

Tambora of today, with a six kilometer wide caldera where its peak once was.

It would take months before news reached Europe by the clippers. In the days before the telegraph, news did not travel faster. Next summer, the chilling effects were felt over large parts of the world. Sulphur from Tambora rose to the stratosphere and reacted to make sulphuric acid. It made a thin veil, which blocked out some of the light from the sun.

Europe was not the only part of the world to suffer. In North America, the eastern coast areas suffered just as badly. New England had blizzards in June 1816. But, the emerging United States were sort of lucky: Western parts of the continent were not as badly affected, and produced enough crops to at least avoid famine. As the grain traveled east, many people went the other way. Go west, young man. Entire villages packed their wagons and headed west for a better climate. Also in Europe, the crisis kickstarted a wave of emigration to the new world.

Out in the world, Tambora altered the monsoons in India, creating draughts through the summer season of 1815. Then, when the rain came, it was a torrent with devastating floods.

How many millions of victims the draught and floods from Tambora demanded in the Indian subcontinent is uncertain. And if the hunger disaster was not bad enough, it was followed by the worst cholera epidemic ever.

Until 1815, cholera had been a deadly specter, which haunted the Bengal and created fear every rain season. Cholera even had its own hindu goddess, Ola Bibi. But it was endemic, confined to the Bengal region, for the simple reason that it was so deadly that the victims died before it could spread very far.

After the floods of 1815, cholera started to spread out, first across India, then through Asia, before it finally reached Europe around 1830. Why is uncertain. The bacterium may have spread by the floods created by Tambora. But, it is also possible that the bacteria had mutated to a more durable strain, and that it was carried around India by the movement of British armies on campaigns to finally subdue the regional kings and rajs to British rule over India. Possibly, cholera could have spread outwards in any case, but it seems that Tambora has at least must share some of the blame.

The southwestern Yunnan province in China was called the “rice chamber” of the Empire, due to its stable, warm, humid climate. Tambora’s veil against the sun made it bitterly cold and dry. The rice died and famine gripped the Chinese empire. Millions perished of hunger.

In all this sorrow, some people in Yunnan found a new crop to grow, one that was more robust and resilient than rice: opium. Yunnan became the heart of opium production in China and led to an epidemic of opium use and abuse in China – which spread out into the world, to be fought by our current “war on drugs”.

Tambora’s explosion is exhibit A that geology can alter the course of history. Geology influences history. 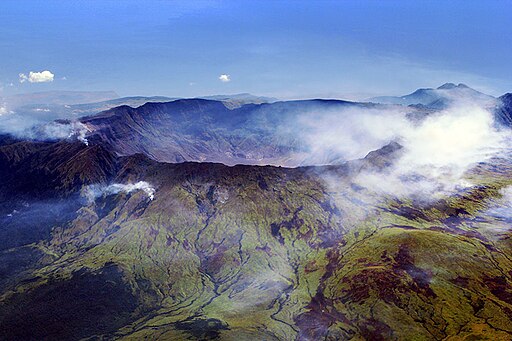 Influence is a deliberate word. Geology nudges history, gives it some pushes and pulls. Obviously, geology does not make despots, political ideologies or religions. Geology does not create political or economic systems. But geology creates the framework history takes place within, the resources necessary to make the history. Wars can be fought over geological resources, and geology creates the “resource curse”, which haunts so many countries. Geology is literally the foundation for society.

Jared Diamond, in his famous book “Guns, Germs and Steel”, argues that geography – which is just the surface expression of geology – is the key to understand the emergence of civilization. He claims that some thousand years ago, in the then Fertile Crescent – the rich flood plain areas around Tigris and Eufrat in the current Iraq, through the Middle East to the Nile in Egypt – geography made several factors work together to turn mankind from hunter-gathering to agriculture. The Fertile Crescent – wetter then than now – had the right climate, water and fertilization from the river floods. There were plants that could be selected and bred to grain, and horses and cattle to be tamed, providing transport and power to pull the plough.

Diamond’s Big Idea is that this birth of agriculture created a food surplus, which in turn allowed for specialization of work, which in turn allowed for technological development (the steel), as well as weapon development (the guns). Living together in societies with animals also evolved diseases (the germs), to which the people later developed increased immunity – but then brought the diseases to the “new world,”, where the natives were helpless victims.

Add a few thousand years of development, and this first advantage of geography manifests itself as the industrialized, technologically developed society of Europe, later spreading out through the world.

The rest of the world never caught up, because they lacked the animals or plants to domesticate, or because of geographical and climate barriers to spread the few they had. And, when the white man came to America, his guns and diseases eradicated most of the continent’s original population.

In my opinion, Diamond paints history with a way too wide brush. He only pays lip service to the importance of ideas, politics, religion and culture. He skips the fact that philosophy, science and the rule of law, which enabled capitalism and the industrial revolution; nazism, which led to WWII; and communism, which led to the cold war – they are all human inventions. They are results of ideas. Diamond evades the fact that China had many of the advantages of the Fertile Crescent: Rivers, climate, the cultivation of rice.

Nevertheless, if not taken too literally, Diamond’s fundamental idea is important: geography influences history. But we should to take it even further – or further back, in time, to geology.

Going forward, in the irregular tempo of this blog, we will explore more about how geology influences the direction of history.

It does so in three fundamental ways:

Geology creates the natural resources we depend on and fight over; coal, oil, gas, metals, ore. Without coal and ore within reach, the industrial revolution could never have happened in England. Without oil, the Middle East would have been very different, and so would world politics.

Geology creates geography, it makes mountains and oceans, which create borders between countries – or lack thereof: The wide plains to the south and west of Russia, with no natural defenses, partly explain why Russia is so eager to have a sphere of influence around it: A buffer zone towards the west.

Finally, geology, through earthquakes and volcanoes, can alter history very directly and brutally, as Tambora did in 1815. Going further back in time, the entire western civilization may have roots in a volcanic eruption in the Mediterranean around 3500 years ago. And counting back in millions of years, the Himalayas may take the honor for making humans from apes. A meteorite takes the honor for turning the rule of Earth over from dinosaurs to mammals. And enormous volcanoes 251 million years ago are, probably, the reason mammals exist at all.

Hang on, and everything will be clear and illuminated. At least as clear as it can be, when we study our history, hidden in the mist of time…

This post is partly based on the books Tambora: The Eruption That Changed the World by Gillen D’Arcy Wood and Eruptions that Shook the World by Clive Oppenheimer.

10 responses to “How geology directs history”